In my my last entry I talked about the creation of the novel’s soundtrack; this time, I wanted to focus on how one song went from existing only as a title, and a stray line, to becoming a fully realized recording.

“I’ll even wax your bannister” was one of the first fictional lyric fragments I wrote. It appeared in an early draft of one of the first chapters I wrote (a chapter that eventually became Chapter 6). The supposed chorus to an annoying radio hit from the late 1990s, I intended the line to be temporary, something that would eventually get replaced. And even after it managed to hang around during the revisions, I thought actually finishing and recording it would be impossible. “Bannister” had grown to play a key role in its chapter, though, so I knew the soundtrack would be more satisfying if the song could somehow be included.

I had to finish the lyrics before I could ask anyone to write the music, and that took a while. The song serves as a kind of villain in the novel, pushed by the record label at the expense of the more complicated, more nuanced music that our heroes create. But it also had to be good at what it did, the kind of villain who lights up the screen whenever he or she appears. This is one of the instances where the forward progress of the novel helped me finish a song; “Bannister” had been through enough revisions that several characters talked about it, in both positive and negative terms, allowing me to hear it better than I had two years earlier, when the line first appeared.

After I finally finished the words, I turned to my friends Jeff Jensen and Zoenda McIntosh. I’ve known Jeff since third grade, and met Zoenda through Theme Music, the online music group that made recording a soundtrack even possible. They eagerly accepted the challenge: to write a song in the style of the band Garbage, with a little bit of techno crunch and attitude, but also lots of melody. Zoenda wrote the music on her ukulele, and then Jeff ran with the full-90s arrangement. The banter in our messages, the trading of ideas, and the brainstorming over mixes, provided the sense of collaboration that made working on records so rewarding. Don’t get me wrong, writing a novel is also rewarding—it’s just a much more solitary experience. 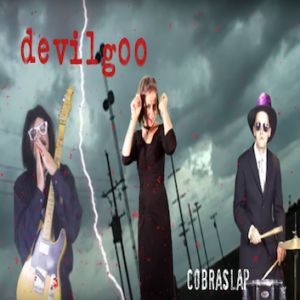 They were even kind enough to go ahead and make the video, which is also referenced in the book. An entire world had somehow been fashioned around a stray lyric from a fictional song, thanks to technology, and my adventurous friends.