Look, it even has a cover! (The individual covers were all designed by talented friends of mine; more about them later). 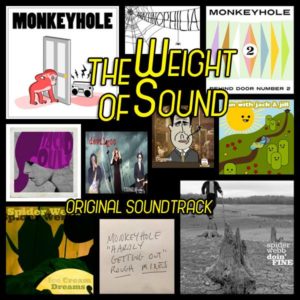 The idea for the soundtrack didn’t come to me until the first draft of the book was nearing completion. I thought it would be fun to have three or four of the fictional songs actually written and recorded, but as soon as the first one was finished, I understood just how much the music could complement the book. And then my OCD Side took over, and I decided that each chapter should have at least one corresponding song. I can’t thank my co-writers, and the dozens of musicians who play on the recordings, enough. Unexpected bonus: hearing the songs helped me sharpen their descriptions and roles in the novel—so the book made the music possible, and the music boomeranged back and strengthened the book.

Each of the fourteen songs plays a role in the book, and I’ll be writing about a few of them in more detail over the next few weeks. Right now you can get a preview on my author page on the Wampus website, where there’s a link to “Pay Me Now,” co-written (and sung) by Paul Melançon. Oh, and hey, he also laid out the CD cover, so let’s all pause and offer him some thanks, yes?