I can still clearly remember showing my mother a small news article about the first concert to be held in Giants Stadium. I was in sixth grade, and it was not the fact that the Beach Boys were going to headline that got me excited–Steve Miller was also going to play, and I was pretty obsessed with Book of Dreams. In what I now understand was a move of great indulgence, she agreed to take me and a friend. We sat four rows from the top of the stadium, and it was the coolest thing I had ever done.

I looked around for clips of that show online, but couldn’t find any. I did find a few bootleg CDs (very tempting), the setlist (um, he started with “Your Cash Ain’t Nothin’ But Trash”? Really?), and this photo. Far right, four rows from the top! See me? 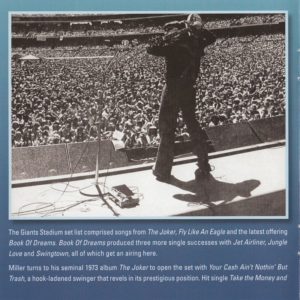 This all came back to me when I took my oldest daughter to see Lorde. Now she’s in sixth grade, though this was technically not her first big concert–that was Taylor Swift, two years ago. I would have taken her to that one, if not for my own gig that same night (at a slightly smaller venue). Watching her and her bestie get increasingly excited through dinner and the opening acts (“Two???”), I remembered going to Giants Stadium with one of my best friends in sixth grade. Eventually we’d be in a band together for decades, part of a four-headed marriage that went across the country and generated far too many stories to tell. I wondered what the future will hold for my daughter and her friend, and hoped they have even a fraction of those adventures.

I probably enjoyed Lorde more than my mother enjoyed Steve Miller. Cool Dad scored better seats, for one thing, in no small part thanks to technology that allowed me to know the minute tickets went on sale. Lorde sang great, danced a lot in a very endearing not-all-that-fantastic fashion, and I enjoy some of her stuff quite a bit. And, yeah, nothing beats watching a crowd sing along with a big hit to close out the show.

I did have some kvetchy old man complaints, though. For one thing, she never thanked the band, which I just found bad form. More depressing, though, was the fact that she used recorded tracks for all the backing vocals. Very odd sensation, to hear layers of voices come out of the speakers even though no one on the stage is moving their lips. Instead, she hired six kind of average dances, who moved in sweat pants in a style that often seemed like they were making it up on the spot. I’d have fired them all and hired three great singers.

The highlight, though, and the moment that inspired this post, came in the middle of the set. The stage cleared out except for her and a piano player. She sat down, and for 10 minutes she held the attention of thousands, talking about how she wrote all by herself, without knowing if anyone would ever care what she was saying, and that she did it because she had to, and would keep it doing it no matter what. She sang three songs this way (including a cover of Frank Ocean’s “Solo,” a song I love), and her voice and the piano flowed in this organic rhythm, tempos that could float around because they didn’t have to sync up with backing tracks. There were lots of kids like my daughter there, that night: preteens to early teens, trying out fashion styles and attitudes to see who they might become some day, and I was very glad that they were all there together, finding some comfort and companionship in the music.

I didn’t even make us leave during the encores to beat the traffic. We stayed for the whole thing, and slowly made our way out with the masses. I thought my daughter’s friend summed up the positive experience can be quite well: “After a night like that I could do anything. I could paint a picture or write a book. I could climb a mountain. I could eat a whole cake.”