I moved from New Jersey to Georgia with the other members of my band after we finished high school. I had never considered myself a drummer as much as a member of Uncle Green, the guy who happened to play drums. That wouldn’t change for a long time, and I can’t point to any specific moment when I suddenly thought of myself as a “real” drummer—just years of recording and touring, with several healthy doses of humiliation along the way.

I also never considered myself to be much of a writer when we moved down, in spite of brilliant pre-teen satires like Star Warts, and several dozen angsty poems written in high school. Someone recently asked when I first recognized myself as a writer, though, and that is a moment I can still see clearly. There’s a lot of downtime when you’re in a band, even one that lives together and practices as much as we did; there are plenty of nights when you’re not gigging, especially early in your career, long hours where I could do whatever I wanted. In retrospect, I’m glad that we did not have fast and easy internet service, because it would have been much easier to make those hours disappear. Instead, I internalized a lesson I would later hear Ann Patchett put into words:  “The intersection of freedom and boredom is where art is made.” (As an aside, I note that I am trying to teach my kids this lesson now, and it seems to be a hard one for them to learn. Maybe we should just cut off the internet.)

Inspired by this free time and lack of money, I started banging away on the Smith Corona typewriter I brought with me. For the first time I tried to create a sustained narrative, and after sixteen days I decided I had something worthy of a title: Having a Great Time. I didn’t feel right calling it a novel, but I did call it a book, even though it featured barely-fictionalized characters from my own life and its fragmented chapters ran less than 100 pages. I called it a book and felt like a writer, especially proud of the fact that I had the endurance to type the whole thing twice. Punching holes in the pages and sticking the thing in a binder, so that I could give it to other people to read, made me feel as though I had crossed the line between those who had written something and those who had not.

Thirty years later, I still have the one and only copy. Having just skimmed it for the first time in decades, I’m glad that I spent the last thirty years learning the value of revision. 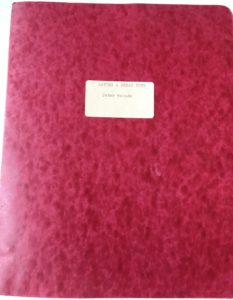